Exhibits at the LA&M in Chicago

The self guided tour takes you through eight exhibit galleries where you will find exciting information on the fetish/leather subculture. Check out the vast holdings of the Terri Rose Memorial Library. Visit Randy in the Leather Bar. See a special exhibit on Leather Women in a Room of Her Own. Have a seat and watch a short film in the Leather SINS Screening Room and finish off your visit with a stop in the Museum Store and the Guest Artist Gallery.

The Guest Artist Gallery is a space where the LA&M features renowned and emerging fetish artists whose works reflect alternative views of sex and sexuality. Exhibits change throughout the year, so check back often for the latest show. 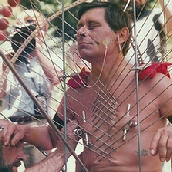 The Father of Modern Primitives

FAKIR MUSAFAR is known worldwide for his fifty year's research and personal exploration of primitive body decoration and rituals. Fakir has introduced concepts and practices for the "body-first" approach to explore spirituality in art, body modifications, SM and what he calls "body Play.” 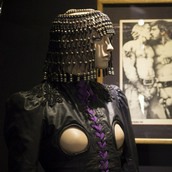 How else could you display history this perverse? 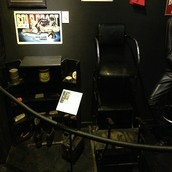 Join Randy and Roxanne for a stiff one

Leather bars started appearing in San Francisco, New York and Chicago in the late 1950s. Many gay men used, and continue to use, these centers of masculinity as an entryway to the leather community. For many men, the clientele of these bars was preferred over the sweaters, perfumes and effeminism of the men in other gay bars. The dirty bikers and rough leathermen (at least in appearance) brooded the sexual atmosphere of the bar. 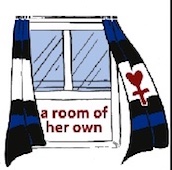 A Room Of Her Own

An exhibit for the Women’s Leather History Project

As I began work for the first exhibit installation of the Women’s Leather History Project, I was excited that we were both literally and figuratively making room for Leatherwomen’s history in the LA&M. It was out of this line of thinking that “A Room of Her Own” emerged, building on Virginia Woolf’s 1929 feminist text that argues for women’s need for space to think and create. - Alex Warner, Curator. 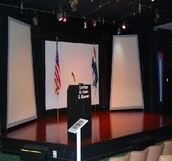 Home to many murals by the artist Etienne

The auditorium is used for the LA&M film series, CineKink, Pantheon of Leather Awards, demonstrations, lectures, community meetings and is always available for leather clubs and groups to use free of charge including the Chicago Leather Kennel Club, Windy City Boys Troop, The Next Generation Chicago (TNGC), Chicago Leather Club and Chicago Hellfire Club among others. 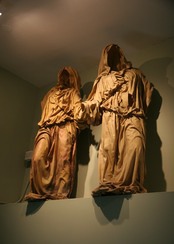 Other Exhibits and Spaces

The self guided tour takes you through eight exhibit galleries

Friendship pins, started as tokens of affection and affiliation between clubs. “A Point in History” highlights certain time periods throughout leather history. Started by Tony DeBlasé, publisher of Drummer Magazine, the time-line shows us that BDSM has a vast history since the beginning of time. The Brad Grauman Gallery, this exhibit space is mainly for the display of large banners from clubs and bars from around the world but it also hosts one of our newest exhibits, The Bondage Exhibit. Leathers Collection/Uniforms Room, leathers and boots which hold historical significance are archived at the LA&M. The Leather SINS Screening Room, This upscale and contemporary screening room houses the institution's vast audio/video collection and runs clips from that collection during regular museum hours. International Mr. Leather and International Ms. Leather Exhibits and the Last Supper in a Leather Bar. 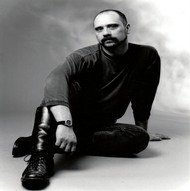 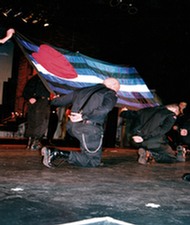 The most widely celebrated of Tony DeBlase's achievements in the world of leather is and probably always will be the Leather Pride Flag which he presented to the world as a "proposed design idea" on May 28, 1989, at International Mr. Leather. As the creator of the flag, he was often asked to explain the colors and design, but consistently refused to do so, insisting that each person could do that for himself. The design was immediately embraced and began appearing in parades within a month of its introduction, and turned up in shops as a bumper sticker barely two months later. 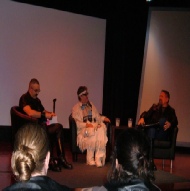 The Oral History project involves the taping, transcribing, indexing and filing of interviews with long time participants or important individuals in the leather community. The transcribed histories form one of the most important information sources in the LA&M's collections. Identifying oral history subjects, arranging the interviews, typing them out and indexing them is an area where volunteers are always needed. 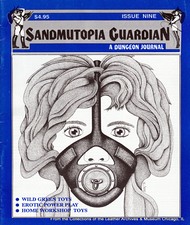 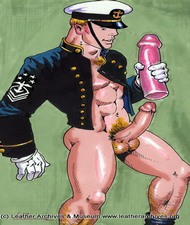 Domingo Orejudos, Dom, the artist Etienne is known for artwork depicting the male body in all of its leather straining heroic proportions—creating fantasies of domination and submission that most leather men try to remember and remember and definitely can’t forget. Dom’s personal and business partnership with Chuck Renslow influenced leather history through establishment of Kris Studios, the Gold Coast Bar, Man’s Country, and International Mr. Leather.

"A Fireside Chat" is a co-production of Douglas O'Keeffe, Christina Court and Joanny Goaddy in association with the Leather Archives and Museum. The "Chats" seek to capture the memories, reflections and experiences of community leaders. Presented live on stage in a talk show format, the "Chats" consist of a formal interview followed by an opportunity for the audience to ask questions of the subject. Each "Chat" is filmed for historical preservation at the Leather Archives and Museum.

Website funded in part through the generous support of the Centaur MC.